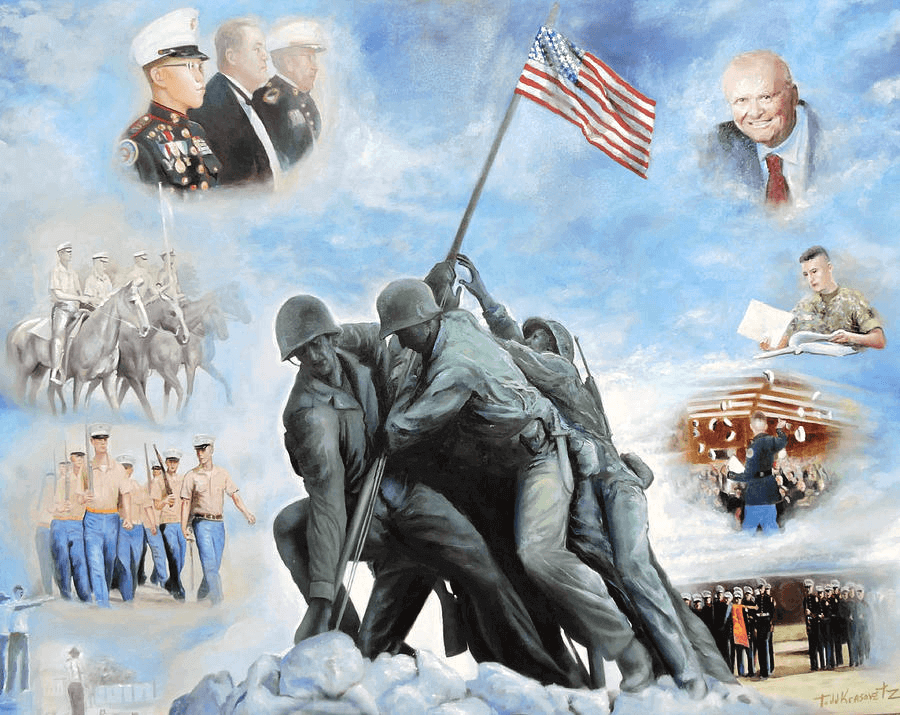 “Kristofer called me last night completely distraught. When he was in Iraq frontline with his Marine brothers they hit an IED in Ramadi. He and his Sgt. were the only survivors (actually Kristofer saved the Sgt.’s life, as he lost his leg during the explosion). They ended up being roommates (5 of them altogether–Jenny being there too) for over a year till “Spawn”–(Sgt.) was finished with his enlistment, and he moved back home to Colorado in Jan. of this year. They both had alot of PTSD issues (Kris still does). Kristofer had found out that Shawn had shot himself night before last. Kris is coming home in July (driving to Missouri), and they had planned to get together.

These poor boys–they’ve seen, and been through SO much. My heart just ached for my son (and Shawn’s family). I believe most of America has NO true idea of what a Soldier goes through, unless they have a family member, friend or acquintance that is in the Military. They SO deserve much more respect than I feel that they get.

I know one thing for sure, I’ve never been more proud of my son and the man he has become!! I know the military art prints couldn’t have been given to them at a better time in their lives.
Thanks so much for all that you do!!! I’m SO glad that Kristofer worked at the Naval Hospital at Camp Pendleton and I found your military artwork “Wings of Hope” on the wall. He commented that “he’d love to have a picture like that” the day I was there. Thanks to Google I located you, and he now has his own “Todd wall” with 3 prints so far! Please, please never stop…

Thanks for listening.
Gail Basket-Mother

“My name is Specialist Mike llamas. I am stationed at Ft. Bliss, Texas in El Paso. I am a injured soldier. I was deployed to mosul iraq in 2007. I came home to my family in dec. right before christmas holidays. Since my accident, my back injury has gooten worse to the point that i had to have lower back lumbar spinal fusion. The doctors removed a disk from my back and replaced it with a piece of fake disc i now am on to recovery.

I have been with the wounded warrior transition battalion which help wounded soilders to get the medical help they need. As I went to the Army hospital for my surgery on july 1st 2008, I walked through the hallway with my wife and I saw that you are a military artist. I saw your painting you did for the military “Wings of Hope” which reminded me of my wife. I say this, is becuase she has been a inspiration to me. She has she stood beside me in all the decisions I have made, including coming back into the army once again from a 3 year break in service and since we barely got married on 070707. When I saw the artwork wings of hope, I thought to myself, ‘that this artist must do more art for the military’. I said to my wife, ‘you are my wings of hope for our family’.

We are the fallen, wounded soldier and you are the angel here to carry us home when in need. I would like to give the ‘Wings Of Hope’ military art print to my wife to tell her how much we love her and we all appreciate all that she has done for our family and to tell her she is our angel. thank you for your time and effort.”

“Back in April my Marine son Patrick,was injured in Iraq!! As we waited in the hospital lobby for him to arrive, we saw Wings of Hope Original Military Art Painintg!

It is AWESOME! I can’t even put my feelings in to words as it just hit home. You see, Patricks humvee was hit by a roadside bomb, he was in an armored humvee and a piece of schrapnel came inside. Anyway, he’s going to be just fine once he’s heeled. But your military art picture really brought home the rest of the story.

His 2 buddies, Marty and Kelly in his humvee were the ones who took his boot off and put on the tourniquet and kept him calm until they got back to base. and I see them as the Angels. Marty and Kelly were killed the very next day by yet another roadside bomb. And when I look at your picture that’s what I see. And I just want you to know how beautiful it is and what it represented to me. Thank-you!”

“I am a corpsman at Great Lakes. I was moved when I saw your art painting of military titled “Wings of Hope” and was thrilled when I was able to purchase a military art print. Being in the military and in the medical field, this print held a very special meaning for me.”-HMCS
Aurora Ruckman

“Thanks Todd for all U do. I have the Wings of hope military art print in my living room and remember the 10 I did as a Navy DOC. I had the honor to be stationed at NHCP with your brother and I met you when they hung the Wings of Hope at the quarterdeck. It means so much”

“I know its an old cliche, but words cannot express enough gratitude to Todd for these fabulous paintings! I was fortunate enough to get 2 of his Wings of Hope military art prints! As an added bonus he included some of his postcards also!”

“First of all, I would like to thank you for your beautiful work. My husband is a Corpsman about to separate from active duty and is a big fan of your painting. My parents and I decided to give this to him as a gift on that day.Thank you”.

“Todd your picture has brought so many people joy. It is unfortunate that this war (years after) has brought the significance of the that picture to life for others who know nothing of what we do. I have an order that I would like to place for a friend of mine (she is actually like a mother) who’s son (my step brother) is over in Iraq right now. I’ll check out your site for it. Thanks for all that you do.”-

This site uses Akismet to reduce spam. Learn how your comment data is processed.