Thank you all who serve for this great nation and our allies. Your selfless sacrifice and patriotism does not go unnoticed. Official Military Art, the military art found here and military artist Todd Krasovetz understands and respects what you all do each day to keep our nation safe.

Your commitment, dedication and continued loyalty is as equally important. This website is dedicated to you. The artists work here is intended to celebrate all branches of service, current active duty service men and women, past, present and future generations.

Todd’s work proudly hangs at various Marine Corps, Air Force, Army, Navy Bases. His work can also be seen in several veteran hospitals throughout the US, for example.

The authenticity of the artwork is a key factor that has allowed Todd Krasovetz to facilitate collections for individuals, as well as college and corporate clients. The reputation as an artist is based on integrity and professionalism and the historical accuracy behind the art created.

” Visual art is considered to be created by the passion for the art by the creator. Primarily, for intellectual and aesthetic purposes. It is up to the viewer to judge if it’s beauty and meaningfulness is revealed” – Todd Krasovetz 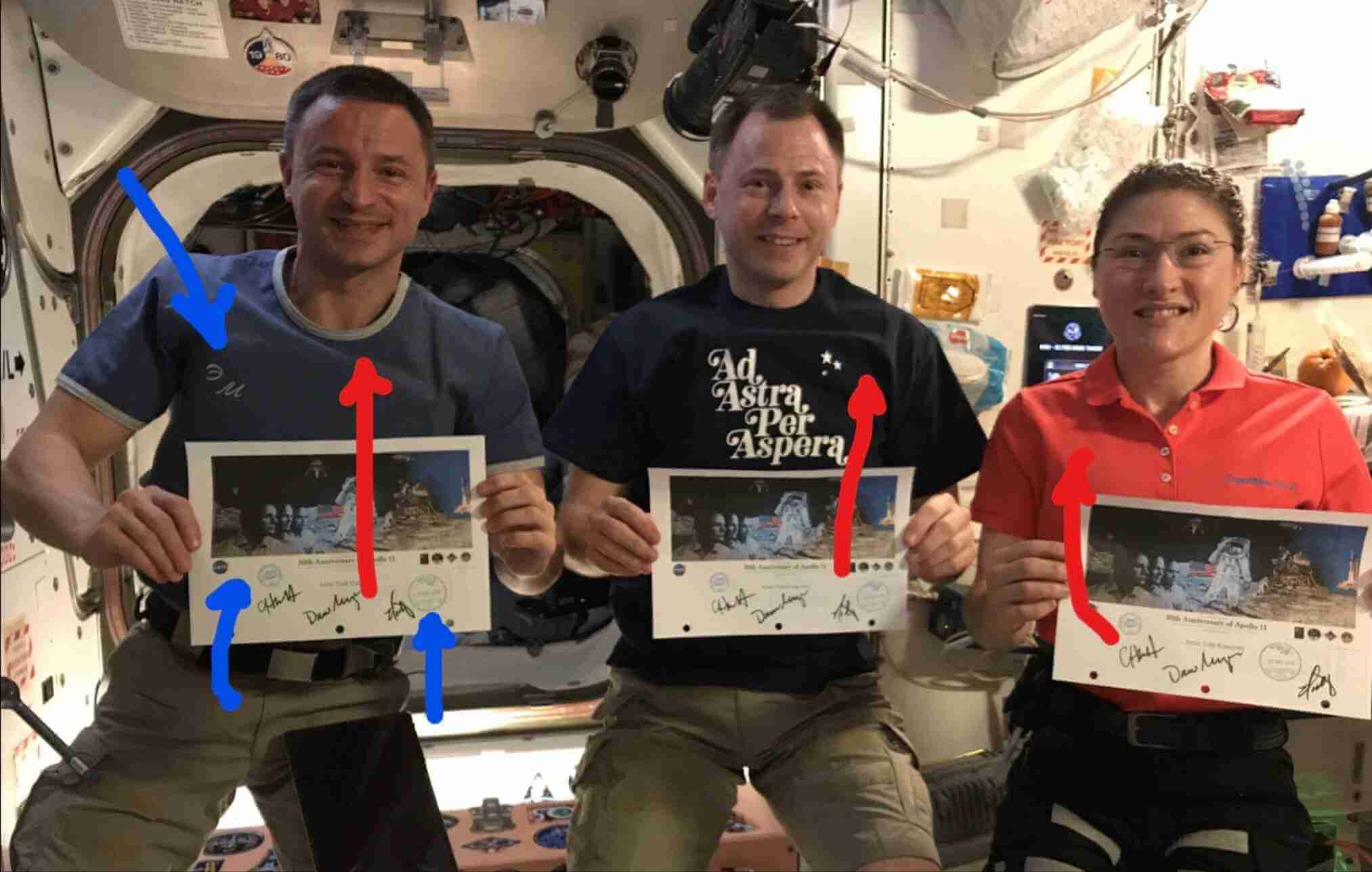 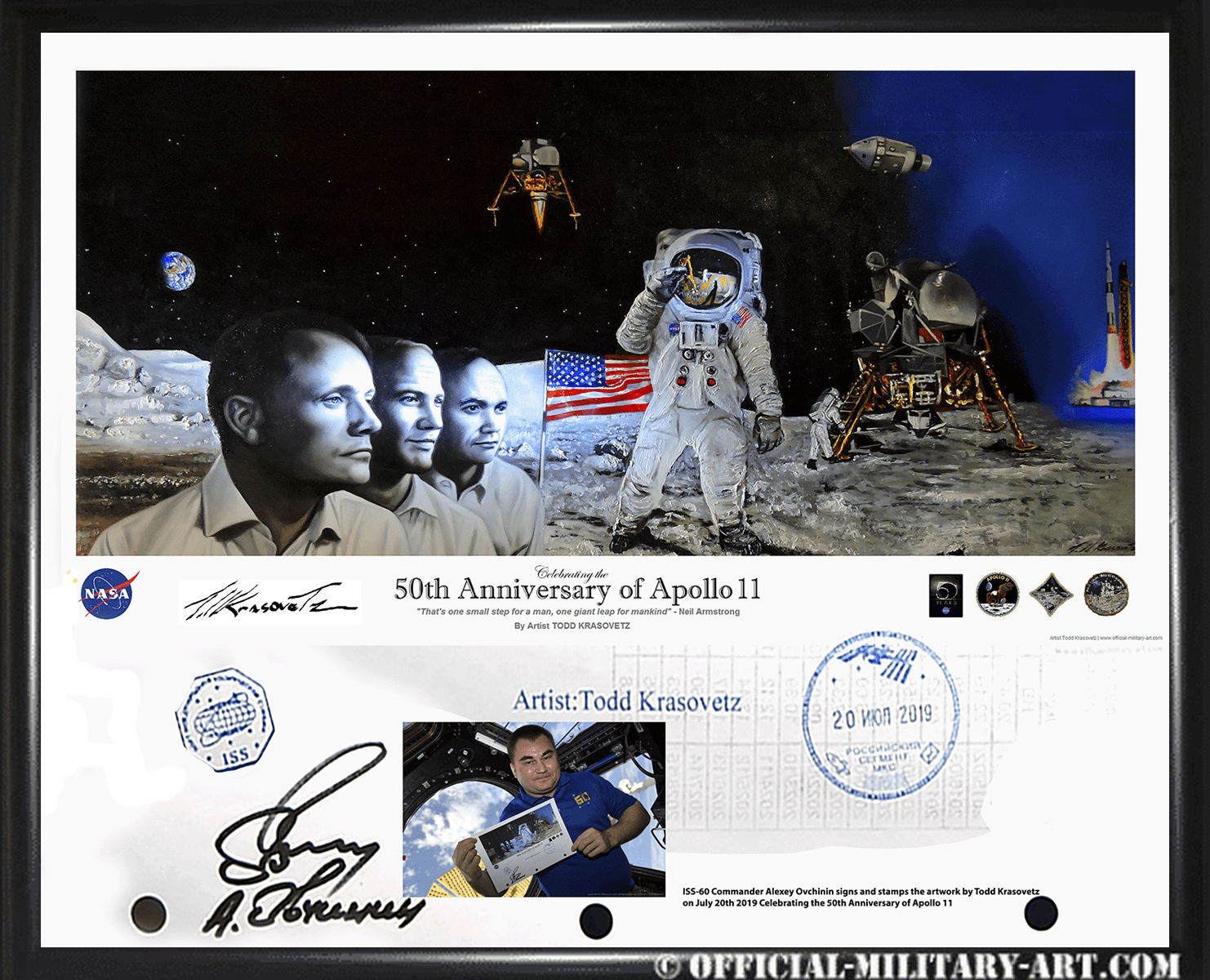 2. Used recycled paper Back side of page used in ISS work routine (You can see on the print the work routine) showing through to the 5oth Anniversary of Apollo 11 print on the front.

Since the dawn of time, man was able to utilize tools and evolve over the centuries, the ever-recurring goal was to explore, to expand the horizons or push the limits for both survival and sacrifice.  Starting with the voyage that brought explorers to the “New World”, the goal was to push the limits out into the unknown, into treacherous waters with the hope of settling into new territories, to create a new beginning.

These great explorers looked to the sea in awe, with intrigue and a drive to expand and explore many centuries ago. Now our latest generations have shifted this paradigm to the skies, to space and beyond.  Again to explore the unknown, push the limits, to create a new beginning for a new generation, which has and will provide a glimpse of hope to settle into new territories, beyond this planet.  The fine men and women, our explorers, are known as Astronauts.

For many astronauts, the drive and determinations to become a part of the elite explorers started as a part of their childhood.  The popularity of the astronauts exploded in the late 1950 and 1960’s with one triumphant feat that not only accomplished “one small step for man” but also changed the worlds view on space travel forever.

If this day on July 19, 1969 did not happen, or if the Russians beat us to the punch, or the mission failed, who knows where our nation would be today. It was because of this monumental achievement our nation has and will continue to encourage a robust space program. The lunar landing has and will continue to provide dreams for our youth, to recruit the best and the brightest of our pilots, to join the elite explorers of the past and future to continue to look to the stars. Please check back often as the original is currently in production. Learn More

So very proud of this portrait dedication in 2013.
Thanks to the artist Todd Krasovetz the Oakleaf Club, the “The Commandant’s Own,” The United States Marine Drum & Bugle Corps and of course, our Docs.
#CorpsmanUp

In 2018, Official Military Art, LLC made headlines when USAWOA commissioned artist Todd Krasovetz. As a result, the success of the artwork created grew in popularity. Consequently, the artist and the USAWOA president and staff, decided to produce limited edition prints for sale, titled “EAGLES RISING”

As a result of this successes, we want to afford you the opportunity to purchase a print of USAWOA latest painting titled, “Eagles Rising,” Click HERE to pre-order your limited edition print. Select drop-down below for frame ordering. Order Now!